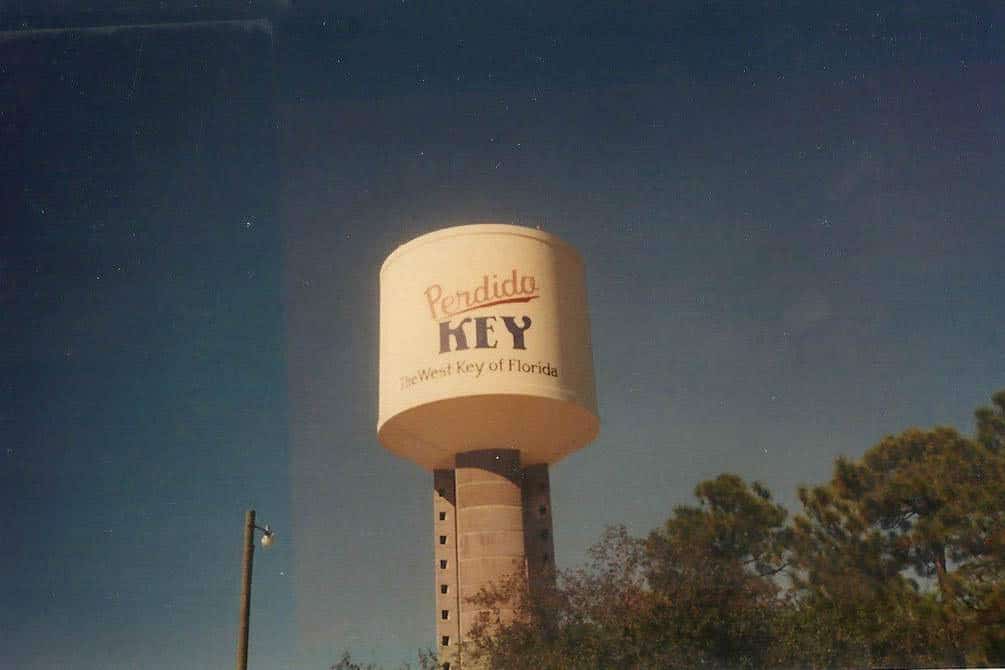 In 1985, “Perdido Key” was rarely used to describe the area. It was mostly called Gulf Beach, it was not until 1994 that the Perdido Key Chamber requested that the US Board of Geographic Names change their maps
to read “Perdido Key”. The Key was also known by the nickname “The Redneck Riviera”. This term came about when the New York Times sent Howell Raines here in 1978 to write a story about the off-season adventures of two great NFL quarterbacks: Richard Todd and Kenny Stabler (both residents of the key). The fun-loving and rowdy Stabler said he “could read a playbook by the light of a jukebox.”

Coquina Village (later named Colors on the Key) was a hub of entertainment and was supposed to be the spur for massive development on Perdido in the mid-’80s. “Coquina Village was something unique for the Key. The collection of shops and restaurants helped to keep visitors on the Key and bring visitors to the Key.” Said Doug Frazier, owner of Frazier’s, an upscale gift shop and boutique in the Coquina Village.

The Flora-Bama and the Cutty Shark (later turned into the Reef ) were two of the only local bars on the island besides the River Queen gambling den which sat on Old River. The Point Restaurant then was selling all-you-eat mullet dinners for $2.50. By the way, most of the mullet was supplied by “Uncle Dave” Resmondo who was a famous fisherman who lived on Innerarity. In 1985 he was 88 years old!

1985 also served up some unusual weather for the year. The Perdido Area was still reeling from the effects of Hurricane Frederick, a cat 4 that did terrific damage in 1979. In 1985, the Key had to evacuate from two hurricanes. The first was Elena during the Labor Day Weekend. It stalled in the Gulf and dumped a lot of rain and high surf on the Key before landing in Biloxi. In October Hurricane Juan, with 85 miles an hour wins, made landfall near the Key and spun off nineteen tornadoes in the Florida Panhandle. Hurricane Frederick brought many changes. The vast development we see now really started after Frederick. As Dr. Harvey Jackson states in his book The Rise and Decline of the Redneck Riviera, “Once the coast was declared a disaster area… the clean-up soon began. Then came the rebuilding. Then came the developers. Then came the change.”

It also caused damage to the bridge at Alabama Pass. A new one was under construction in 1985. The damaged bridge was built because in the early days the pass was dangerous to boats with strong tides and fast forming sand bars. In 1953 the Alabama Dept. of Conservation began to dredge the pass. In 1962 a small two-lane concrete bridge caused the state border to change. For Alabama actually building the bridge, Florida allowed Alabama to claim about three miles of land on the Key.

The development of the Eden Condominiums was a big deal at the time. The iconic building in Perdido Key was the tallest in Escambia County! (See Eden Story.)

The World- Famous Mullet Toss started in 1985… The late songwriter and singer Rusty McHugh (who played a lot at the Bama) wrote a song called “The Mullet Toss”. One of the lyrics is “We drink all day and party all night and Sunday we praise the Lord, we make a party out of throwing dead fish, brother tell me we ain’t bored.”

Information for this article was gathered thanks to the help of Fran Thompson of The Mullet Wrapper and John Vick of Pee Paw’s Histerical Key Tours.

By: Erin Wilmer   It was May 1989, I was 19 and checking into my first duty station. I can remember feeling alone and scared. After completing the check-in process, I walk into my barracks dorm that would be my home for the nextfour years. In the middle of the...
Read More