The Perdido Area is a bird’s paradise! From nature trails to beach habitats, birding in the Perdido Area is a huge pastime for visitors and locals alike! The diversity of habitats ranging from pinewoods to beaches and saltwater to open woodlands make an attractive destination for native and migratory bird species.

With many protected lands in the area, we are able to support ecosystems suitable for many wildlife in the Perdido Key Area, a haven for more than 300 bird species.

Osprey: Known as Florida’s fishing eagles, ospreys have a distinct M wing shape and make their habitat near brackish estuaries where they can scan the surface for fish. Osprey mat for life- birds of a feather really do stay together!

Brown Pelican: A symbol of the Gulf Coast, the brown pelican is making a comeback. These water birds weigh 6-7 pounds and have a 7-foot wingspan. The pelicans fly as fast as 30 miles per hour and can often be seen perched on a piling in the bay.

Blue Heron: These graceful natives can be found along the shoreline hunting for fish. These birds have long legs and a long S-shaped neck.

Yellow-Breasted Chat: This lovely songbird prefers to spend its time in the dense brush, so it’s fun to finally spot it- especially since this area is not a common location. You’ll know the adult by its bright yellow chest and throat, white belly, and white around its eyes. Listen for the cheeps and whistles as a clue to its whereabouts during May and again July through September.

Gray Kingbird: These conspicuous birds will be hard not to notice if you’re visiting Perdido Key between April and October. Large-billed and vocal, gray kingbirds can be found along Florida’s coastline, waiting for large insects to fly by. They also eat other small vertebrates, including lizards and occasionally fruit. Look for these birds in mangroves and open coastal woodlands.

Roseate Spoonbill: One of Florida’s most distinguished wading birds, the roseate spoonbill is often confused with the flamingo because of its spectacular pink plumage. the main difference between this bird and the flamingo is its bill- flat and spatula-like. The bird uses this unique bill to feed on fish, crustaceans, and aquatic insects. Look for the spoonbill during May in coastal wetlands like those in Big Lagoon State Park.

Johnson’s Beach on Perdido Key is a hotspot for migrating birds in the spring and fall. Watch for pine warblers, towhees, clapper sails, spotted sandpipers, and wintering ducks. Fallouts can be seen in April as migrants reach land for the first time 8 am to sunset.

Acting as a gateway for the Great Florida Birding Trail, this 600-acre park along the intercoastal waterway is home to shorebirds, wintering ducks, dunlin, redhead, bufflehead, and red-breasted mergansers, black-bellied plovers, yellow-billed cuckoos, and flickers. The park offers five miles of nature trails and a 40-foot observation tower with stunning views. Birders can even stop at the visitor center and borrow a free part of binoculars from 8 am to sunset.

The 4,200-acre preserve protects rare and endangered plant species such as white-topped pitcher plants, one of two carnivorous plants in the world. The half-mile trail and elevated boardwalk lead to an observation area at the bayou, while the 6.5 mile Perdido Bay Trail leads to the beach. Listen for brown-headed nuthatches, white-eyed vireos, pine warblers, and bobwhites from 8 am to sunset. 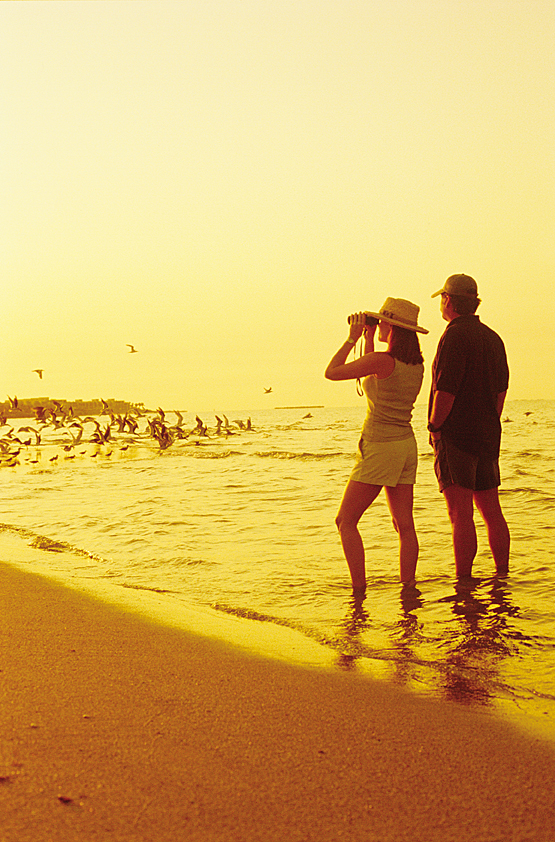 ← The Little Zoo that Grew History of Perdido Key →

The Perdido Key Area has an extended history of music and songwriting, shaping the culture of the community. When visiting the lost key, one must-do activity is to enjoy a lively, musical atmosphere while indulging in some local cocktails or treating yourself to some...
Read More

Here on the Gulf Coast, our locals and dedicated visitors love breakfast! You don’t need to be an early riser to enjoy the best eggs benedict or Bloody Mary’s in Perdido Key; most breakfast in the area is available as a delectable brunch as well!  Whether you can wake...
Read More

The Sun is an essential part of our everyday life in Perdido Key.  It keeps our white sandy beaches a sunbather’s dream and provides us with reflective, shimmering beauty atop our emerald, blue-green waters. We cannot help but flood our social media timelines with...
Read More

By Emily Klinga   Pensacola has a deep-rooted history of military presence positioned by our very own Naval Air Station (NAS) Pensacola. Proclaimed a Naval Air Station in 1914, NAS Pensacola is renowned as the “Cradle of Naval Aviation” supporting the initial...
Read More

Sunset Weddings Are the Best by Karen Qualls

By Karen Qualls, Beach Bride Weddings You are one of many getting married in 2021 and have been debating the wedding time. Since you are getting married on the beach in Perdido Key, Florida, you should seriously think about the sunset. Why? you ask, why not midday?...
Read More

Thinking of renting a boat or bringing your own vessel to explore the ways of the water here in Perdido Key? Then you definitely do not want to miss these boating hot spots in the area! Be sure to pack lots of sunscreen because you will want to enjoy these exclusive...
Read More

Invasive Lionfish in the Gulf

You may have heard of or seen lionfish during your visit to the Gulf coast, maybe you even were able to visit during the Annual Lionfish Removal and Awareness Festival held in nearby Destin each May. But did you know the reason behind the festival was to REMOVE these...
Read More

Although no dogs are allowed on Escambia County beaches, there are several places in the Perdido Key area that your furry friends will love! Perdido Key is loaded with park areas that allow dogs on the walking trails if they are on a leash. Some great trails for your...
Read More

When visiting the gulf coast, it should be a part of everyone’s itineraries to enjoy our local fare from some of our favorite area restaurants. Explore our mix of eateries and find hidden gems throughout the Perdido Key Area! Whether you are craving smoked barbecue,...
Read More