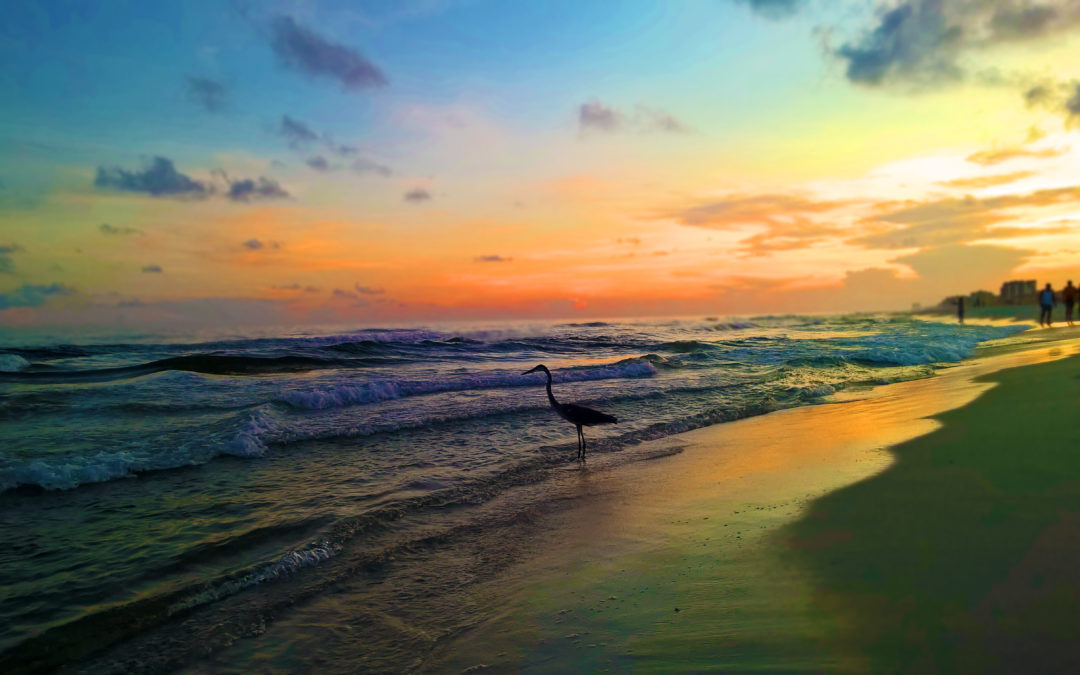 Some call it history and you may call it fate, but I refer to it as a blessing. This historical account is penned in archives, located on maps, and the subject of stories told by the old still being spread today. Those who know applaud a Bear Point Indian Chief in 1693 who led a frustrated Spanish savant, Carlos de Siguenza y Gongora, through a cut of deeper water to what was christened “lost” or “hidden”; thus PERDIDO Bay.

The northwest corner of the sunshine state welcomes the curious, the rich, the poor, the healthy, the sick, the broken, the healed, and certainly the adventurous. What was once viewed as a barren peninsula now supports kiss- the sky-tall buildings. Perdido Key has been attracting honorable servicemen, out-of-town visitors, and snow-driven birds for over 325 years. Some have remained, some have departed with memories, and many will return to create more scrapbook snapshots. Welcome aboard my friends to the sand that never ends.

Both sea and shorebirds carry esteemed names preceded by a colorful description of roseate, red, white, blue, purple, brown, and even green. Those such as frigates, skimmers, gulls, and herons swoop and give nods as they unknowingly entertain. Treasure seekers, local pelicans, plovers, terns, and willets instinctively go about their daily tasks amidst the sun and beach.

Sands of white extend deep beyond blue breaks topped with sun-lit froth that curls under with a gentle crash.

In and around visitor’s quarters, lights unused should be turned off and the beach sand pits re-filled to save our nesting sea turtles. Early risers may experience the rare but vacation-making view of a mother turtle’s arduous trek up from the surf to deposit a clutch of rubbery eggs into her nest. Only 1 of 1,000 will return and repeat the ritual. Beach-going necessities such as toys, plastic, glass, tents, and apparel pose risk to this ancient cycle.

The Perdido Pass, once a historical land cut sought by explorers, is blatantly more visual today; thus Perdido Key Island, circa 1933. It is, gives or take, 3 miles west of the unique, Sunday meetin’, oyster slurping, music strummin’ Flora-Bama. See for yourself why it’s not just a line in the sand.

Directly across Perdido Key Drive is an example of one entry into the good Lord’s natural habitat. The boardwalk leads out to the sea-oat surrounded white sand beach with windblown dunes and home of the infamous Perdido Key Beach Mouse. Many call the 16 mile-long stretch of a salt waterfront home, while its natural habitations quietly shelter many. No longer “lost” or “hidden” as the Spaniards dubbed Perdido but now paraíso difícil de dejar;
Paradise is hard to leave!

The dense, vibrant expanse of soaring and gnarly trees has weathered decades in silent witness to our family’s 80-year history at Innerarity Point.  There is something profoundly enchanting about the forested landscape fronting the Intracoastal Waterway that invigorates the senses.  The howling winds course through the treetops in the winter.  The clamoring birds attract in the springtime.  The sun’s rays filter at dawn and at dusk.  The motion of shadows they accentuate as broad-winged pelicans, ospreys, and herons fly overhead.  The dew their leaves drop like rain on foggy mornings.  The aromas they release to please the senses.  The life emanating from the majestic oaks, pines, cedars, hickories, and magnolias is utterly captivating.

Nestled between the Intracoastal to the south and Perdido Bay to the north, the Innerarity Point peninsula is protected from the Gulf winds by two barrier islands, Perdido Key and Ono Island. Like the Gulf of Mexico itself, our sanctuary has proven its resiliency time and again.  As Ivan-damaged trees have regenerated since 2004, we have delighted in a growing population of ospreys, along with the pelicans, herons, bluebirds, owls, dolphins, mullet, blue crabs, snapper, flounder, tug-pushing barges, luxury boats, sailboats, naval aircraft, and storied Blue Angels that regularly entertain and nurture a sense of belonging.

The night sky twinkles on starry nights and casts ethereal beauty when the shimmering moon shines full and bright. Windows cracked opened in the evenings from Fall through Spring let in the fresh salt air and the melodious sounds of calling birds, crickets, frogs, and diesel-powered tugboats.

There is something about the natural beauty and tranquility of Innerarity Point that is magnetic.  Past, present, future – Innerarity Point was, is, and will always be a crown jewel that attracts fascination with its grace and bountiful joy.  We fully expect descendants in generations down the line will clamor to this place on the Point we call ‘home’, where towering treetops filter euphoric, perpetual light, and where spirits soar with the living creatures that surround us.

← The Story of Innerarity Point The Forgotten →